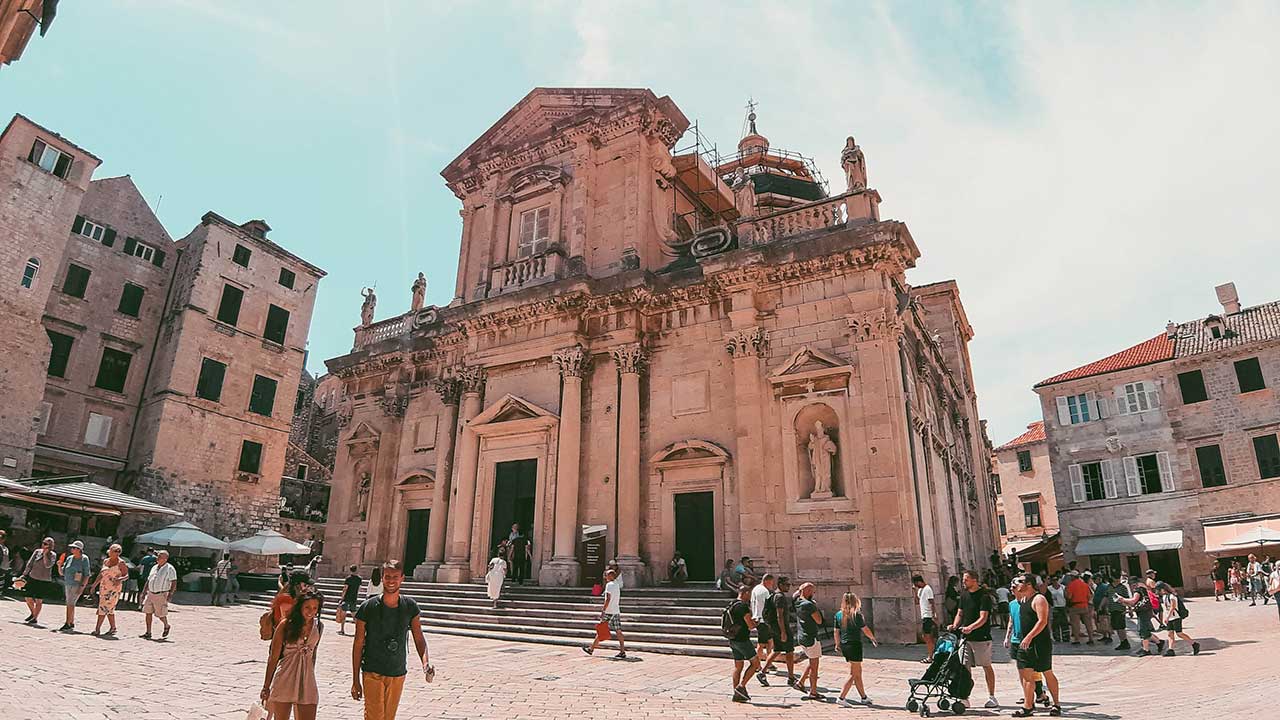 The dome of the Dubrovnik Cathedral is the recognizable photogenic landmark you see in most panoramic photos of Dubrovnik Old Town.

The whole cathedral exterior is best viewed from the walls, where you can see it from every angle as the ramparts go around the town.

The Cathedral of the Assumption is close to another popular Catholic religious site, the St. Blaise Church. The cathedral is quite small compared to cathedrals in similar European cities with a rich history. Despite its small size, the cathedral's grand interior, designed and decorated in a simplistic style, still holds your attention.

Its interior looks so austere compared to other majestic European cathedrals because of the circumstances under which it was rebuilt. After the earthquake in 1667, when the old cathedral was ruined, the Dubrovnik Republic was in economic decline. It didn't have the riches to adorn it the way it was before.

Which is a shame. How prettier would Dubrovnik look if the earthquake had never happened? All those ornamental Renaissance buildings like the cathedral would make today's Dubrovnik even more attractive.

Note: It is important to note that visitors are expected to be reasonably silent, dress decently, and not use a phone while visiting the cathedral.

The interior space feels immense and awe-inspiring. I managed to get a few moments of peace. On a quiet day, the cathedral makes a wonderful place for contemplation. But during our visit, the interior got quite busy very quickly.

During my visit to the cathedral, I was enchanted by its Stations of the Cross, which were unique and simply beautiful.

When we went inside the treasury to see the relics, we were astonished at how many relics there were. There is a 3 euro charge per person for admission to the relics room, cash only.

Tips: If you visit it at Sunday's mass at 10, you can experience a special atmosphere created by a cathedral mix voice choir and beautiful organ music.

A visit to the treasury is well worth your time and money if you are a Catholic or just interested in seeing items of religious significance from the past. You'll find the treasury in a side room to the left of the altar (as you face the altar).

It is a one-room treasury that houses 182 reliquaries holding relics from the 11th to 18th centuries. Most notable is its gold-plated arm, leg, and skull of Saint Blaise (patron saint of Dubrovnik). Additionally, the treasury contains a True Cross relic. No photography is allowed in the treasury room, but it is not an enforced rule.

Interesting: An early Romanesque cathedral was built on the same site in the 12th century. Accord­ing to a legend, the English King Richard the Lion Heart had it built on his way back from Palestine and the Third Crusade in 1192 AD, having suffered a shipwreck in which he only managed to save himself on the Isle of Lokrum.

He vowed to build a church on the isle in honor of the Virgin Mary, yet the wise people of Dubrovnik persuaded him to make it in the city instead. Thus a grand basilica was built on the remnants of the previous cathedral and decorated with valuable artifacts and works of art.

Unfortunately, the cathedral was badly damaged in the disastrous earthquake of 1667. Only the foundations and parts of the walls 1 meter high remained.

The present baroque church was built from 1673 - 1713 on the initia­tive of the respected citizen of Dubrovnik, Stjepan Gradić, the head of the Vatican Library in Rome and the Pope's counselor in his relationship with the Dubrovnik Republic.

Gradić raised funds and found architects in Italy (Andrea Buffallini and Paolo Andreotti), who, together with local masters, constructed a three-nave basilica with a huge dome on the naves' intersection.

Interesting: The church's roof is adorned with the statues of ten saints, and a Romana steeple with three bells rises above the sacristy.

It took three decades for other Italian architects, including Francesco Cortese, Pier Antonio Bazzi of Genoa, and friar Tommaso Napoli of Palermo, to complete the cathedral. Local architect Ilija Katičić was the one who finished the construction of the cathedral.

The interior is plain with side chapels, on whose altars are paintings by local masters from the 17th - 19th century, such as Petar Matei-Matejevic, Benko Stay, and Carmelo Reggi, a naturalized citizen of Dubrovnik. There is also a famous renaissance painting of the miraculous Our Lady of Porat, once kept at the Od Sigurate Monastery on Prijeko.

Titbit: For centuries on Assumption Day, the Our Lady of Porat painting was carried in the consecration procession through the harbor and the city.

The most valuable work in this representative baroque building is Tit­ian's painting The Assumption of the Virgin Mary in the apse behind the main altar. The precious polyptych painting was commissioned for St. Lazarus Church at Ploce, outside the city walls.

The church was the center of the Dubrovnik bourgeois brotherhood of rich merchants and seamen called Lazarina. After the big earthquake and upon the cathedral's restoration, the Dubrovnik Senate decided to ask this important brotherhood to give away the above-men­tioned polyptych to the newly built church, which they did.

The painting was believed to be so precious so it was placed in the cathedral, whereas a copy was made for St. Lazarus' Church.

Interesting: The citizens of Dubrovnik used to buy those valuable paintings from well-known Italian painting workshops and donate them to the city's cathedral. As a result, several paintings of great value from the 13th - 16th century are also kept in the cathedral's treas­ury, whose walls and ceiling were painted by the already mentioned Petar Matei Matejevic in the 17th century.

The apse's walls are adorned with four paintings on Bibli­cal themes from the 17th century made at the Padovanini workshop, and Brocardo's 16th-century painting of St. Matthew is to the right of the apse.

However, the most important part of the treasure collection is the numerous liturgical gold and silver objects partially made in the Dubrovnik workshops.

Although only a small part of the Cathedral treasure has been preserved, having survived earthquakes, fires, and plundering, these works of art conjure up the wealth and taste of this small community, which found its purpose in faith and simplicity.

Relics of heads, legs, and hands of saints, including those of St. Blaise, the city's patron saint, as well as many of the finest liturgical utensils, are also exhibited in the sacristy.

Interesting: Quite perculiar is the Relic of the Holy Diaper: The Swaddling Clothes of Jesus, sometimes called the Jesus nappy which is one of the the more remarkable relics on display in the Reliquary Treasury of Dubrovnik Cathedral.

Having been brought from the Holy Land for centuries, the relics were placed in minutely detailed beds from the 14th - 18th centuries showing elements of all European art styles.

Made in the style of similar models from all over Europe with floral, figural, or ornamental decoration, they show the artistry of both local and foreign masters.

An international art cen­tre, Dubrovnik was connected with many other European art centers. Therefore the art objects kept in its cathedral belong to the same circuit. In addition, exceptionally rich vest­ments and many jewelry pieces, which the congregation donated to the cathedral, are also kept in the sacristy.

The surviving art objects of the Assumption of the Virgin Mary Church and the Church's importance as a Catholic stronghold remind us of the important role that Dubrovnik once had in Dalmatia, Croatia, and the whole of Europe.

Dubrovnik Cathedral is a popular religious attraction, and many tour guides take their groups there. Avoid crowds by going at the opening hour or close to closing.

Looking at the feedback travelers leave online, the consensus is that the Dubrovnik cathedral is a worthwhile visit but not as outstanding as some other European Cathedrals. However, they do agree that paying the ticket to the treasury is worth it, as the collection of relics is impressive.